Our guides thought we were out of our minds to want to set up a shot in Jodhpur, they wished us luck and said unfortunately they’d be “busy”.  After the rural photo shoot under our belts, we knew we had to be much more streamlined in the middle of a city.  For the rural shoot, we were able to set up our light stands and tripods without too much problem.  We decided to come into the city with a plan. 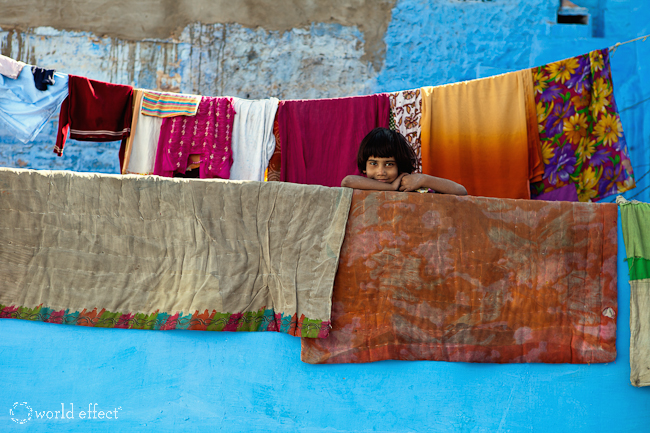 Our first plan of attack was to find the perfect blue wall.  There are many very photogenic walls in Jodhpur.  Many of the blue walls we found that would be beautiful to photograph were up narrow roads accessible only by foot.  We needed to find a wall that our auto-rickshaw could access, that was not on a major thoroughfare to avoid traffic and had a good escape route.

We found our location.  After we explained (I think) to the home owner what we were doing and they said it’d be okay (I think), we cleared the area of holy cow poop and we were in business.  We rolled out some bubble wrap to put the rugs on which the local kids went crazy over.  A cow was about half a block away, so we coaxed it into the frame.  If you ever need to lure a cow in India say, “go go go go.”  We originally started with the kissing noises to get the cow’s attention, but were immediately corrected by locals.  I’m not sure what kind of lude message we must have been communicating to the cow.

We had to avoid placing anything on the ground to deal with traffic and people.  We had the guy driving the auto rickshaw truck be out lighting guy.  We had him wear a backpack holding the battery and had him hand hold a soft box with a grip handle.  We shot hand held timing the shots as people, traffic and cows went by.

We were in and out of the shot within an hour with successful results.  We were quick enough that the crowd never grew too large.  There was a very vocal old man, it was like he was watching a comedy.  He never stopped laughing and was shouting things at us.  I wonder what amazing compliments he had for us?

We’re anxious to reveal our product and the photography when our online store launches, stay tuned!!

If you liked this post and photography be sure to sign up for our free newsletter and ebook on the form in the sidebar of this page.

5 Responses to Adventures in Photography (pt. 2)